I love the National 12 Stage. In fact, I would go as far as to say that it is one of my favourite events of the running year. I enjoy the drama of the race and the story lines that evolve over the course of four hours of racing. I enjoy taking over from a team mate and charging down the incline from the start line that takes runners to the start of the famed Sutton Park hill. I enjoy trying desperately to hang on to anyone who passes me and I love the feeling of chasing other athletes down and passing them. In a strange way, I enjoy the agony of turning the corner before the finish and sprinting uphill past the crowds of spectators, trying to get every last second out of my race-worn legs.

I had been looking forward to this year’s edition for weeks. It took place this weekend on a sun-drenched day in Sutton Park and was every bit as exciting as it has been in previous years. But I wasn’t taking part.

Unfortunately I started feeling tightness in my left calf on Wednesday morning after a heavy track session the night before. It was no better on Thursday when I tried to run a couple of fast miles in Cannon Hill Park; I couldn’t get the full range of motion out of it and it felt like it was going to get damaged if I ran any faster. Just like it did before I tore it in October. At the National Road Relays.

After spending several hours wrestling with the part of my brain that was telling me it was just ghost pain that would disappear with a good old fashioned bit of hard road running, I decided to call Dave, my coach and team manager, to tell him I wouldn’t be able to run. Better safe than sorry.

With an unexpected Saturday afternoon ahead of me and ’12 Stage’ now removed from my calendar, what was I going to do with this free time? Put a camera in my bag and go and watch, of course… 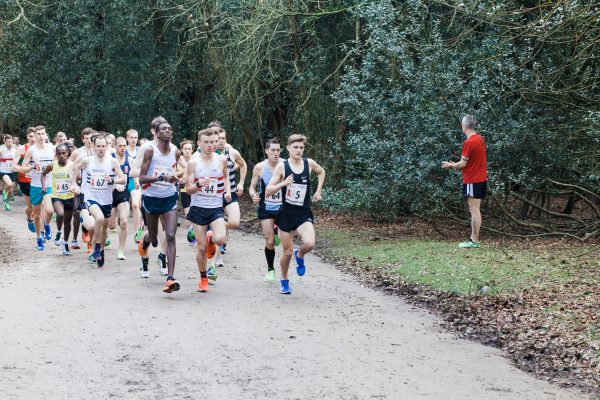 I was flying. After, to borrow a phrase from my old team manager Richard, ‘treating the first hill with some respect’ I was moving nicely through the field on leg one of the National 6 Stage. One by one I picked my opponents off, running alongside before lining up my next target and chasing it down. Everything was going perfectly. Until it wasn’t.

I got a small clip from behind from another athlete as we headed out on the out-and-back section of the course. As I stumbled and tried to regain my balance my right foot struck my left calf. Although the initial feeling was one of discomfort it wasn’t hurting and wasn’t stopping me move through the field. This all changed, though, when we started descending. The extra load suddenly caused a cramping in the calf which reduced my fluid stride to a hobble. Unable to stop as this was a relay, I limped the final mile, getting passed by all but four other runners. The finish line couldn’t come quickly enough and when it did I promptly collapsed over it, my left calf in agony.

Today it is sore and it remains to be seen how bad the injury is, but this was a timely reminder that it only takes one small incident to turn you from a fully fit athlete to someone struggling to walk down stairs. Injury can happen to anyone at any time. Hopefully I will be back on two feet again soon.

The Worst Race Ever

Often a traumatic experience takes a long time to recover from and depending on the severity of the trauma this can be counted in days, weeks or even years. In my case it is 10 months.

Periodically I have a dream where I am competing in a race that I am well prepared for but when the gun goes I freeze, unable to move. My legs feel like they have concrete weights attached at the ankle and the track has turned to treacle. Incapable of running, I desparately flail around trying to find something to grab hold of as I fall to the floor, in the vain hope that I can pull myself forwards. My opponents laugh as they lap me, or even worse, give me a condescending pat on the back as they fly off into the distance. The torment is usually concluded, not by me finishing the imaginary race, but by my alarm clock sounding. I wake up, check that it was just a dream, and when I realise this, laugh it off and get out of bed.

But February 27th this year was, sadly for me, no dream. I entered the National Cross Country Championships as one final attempt to salvage what had been, by the standards I had set myself, a mediocre cross country season. I was in decent but not peak shape but thought that this would be at least sufficient for a finish somewhere in the 100-150 range. How wrong I was. Accompanied by Stephanie, who did not realise what she was letting herself in for, I made the short journey to Donnington Park, an uninspiring corner of the East Midlands better known for heavy metal and motor racing than for athletic excellence. The charcoal grey skies punctuated by low flying budget airliners on the descent to the nearby airport felt like a dark omen for the horror that was about to unfold over the next 49 minutes.

The details escape me so long after the fact, but the memories I do still have are similar to those of my recurring nightmare and appear in my mind in a hazy black and white; the mud seemed thicker for me than for everyone else, the hills steeper, the course longer. Every ascent heralded a loss of 10 places, every descent 5 more. Nothing was working. I was overtaken by people who I didn’t recognise from races and those I would normally be racing against were several minutes further up the course. At some point I saw a runner I knew step off the course, clearly having a similarly bad day. The voice in my head telling me to do the same was loud but silenced, perhaps misguidedly, by the fact that Stephanie had come to watch me race and would be disappointed if I were to record another DNF. At some point I entered the finishing straight. By this point all mental strength I did possess was gone and I didn’t even bother trying to muster a finishing sprint. I collapsed over a railing near the finish line and went home and sulked.

In fact, though it never got as bad for the rest of the year, 2016 was far from a vintage year for me from a running perspective. The summer and autumn were better but unspectacular, characterised mostly by performances in races that didn’t quite match up to how well I was training. Highlights included a steeplechase PB in August (finally under 10 minutes!) and a good position in a Birmingham League race at the end of the year, but others were few and far between. Whilst this all sounds very negative, I am actually as optimistic as ever about running. In every race I performed badly in there was a winner. In each of these races there was someone setting a personal best, someone beating a competitor they had never finished ahead of before, someone exceeding their expectations. There is always something good that can happen in a race; there is always a winner. On several occasions in the past that person has been me and it will be me again. And as long as the overall trend is upwards I’ll be working hard and sticking at it.

Highest volume week of the year so far, and highest (I think) since early 2012. Good track session on Tuesday, enjoyed the National on Saturday. I’ll cut back the training this coming week ahead of Sunday’s half marathon.