The Power of Ten

I’m a late convert to cross country, a born-again cross-tian if you will. I didn’t always love it but turned up and got it done in the knowledge that I was helping my team and with the awareness that it was probably doing me some good, if nothing else.

This started to change about three years ago and now cross country is my sole focus during the winter months. Rather than having goals centred around times in road races I strive to achieve certain positions in cross country races, where time is irrelevant and head to head racing is everything. For a few years now, my goal has been the same: top ten in a Birmingham League race. The Birmingham League is arguably the strongest and most competitive regional cross country league in the UK as, despite what the name suggests, it encompasses a wide geographical area including Birmingham and the surrounding counties. The strength of the league also owes to the fact that two of the top sporting universities, Birmingham and Loughborough, compete in it.

I remember my first top hundred placing ten years ago and shortly after, my first top fifty and then top thirty. Progress is not linear though; each ten gets progressively harder to crack, and for two years my PB (personal bests are places in cross country, not times) has been stuck at 12. Today I finally did it with a strong run on a very wet and muddy course in Coventry’s Coundon Park, a course I have raced on many times before.

It nearly didn’t happen. On Thursday afternoon I switched my phone on after work to find a series of messages about the cancellation of Saturday’s fixture, due to take place in Great Malvern. The land owner had withdrawn permission for the race to take place due to poor weather and the race, it seemed, was off. I was very disappointed, having worked towards being in good shape and well rested for this race for weeks. Fortunately, by the following day the league had managed to persuade one of the other divisions to host our race on the course they were using anyway, and the race was back on.

I ran the race the way I usually try an run a cross country race, starting way back and picking people off in the second half. By the end of the first of the three laps I could count the number of people ahead of me. Seventeen, then fourteen and then eleven. I knew I’d get in the top ten with a strong final lap. I made up ground on the firmer sections of the course and tried to hold my position on the muddier sections. In the final kilometre I was as high as eighth and had a good battle with two other athletes, one of whom held me off in the final hundred to claim the ‘last guy with single digit position’ prize. Nonetheless I was absolutely delighted. This was the best performance I have had in cross country and only serves to motivate me further. This should give me belief and confidence going into the next race, safe in the knowledge that the higher places are something I can achieve.

The next race is in four weeks. I can’t wait. 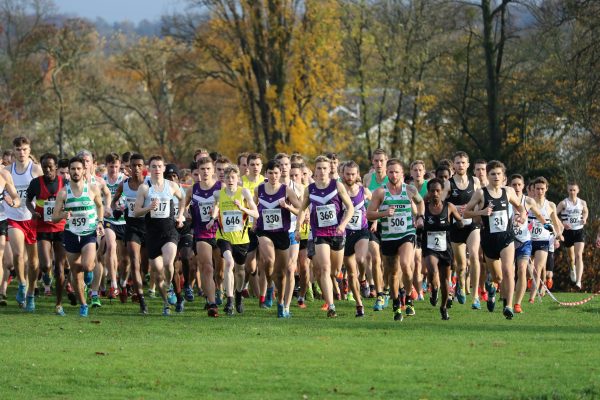