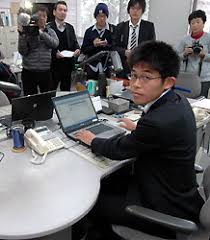 Here are some of the entrants to the 2011 Robot Marathon in Osaka.

This made me laugh. Read about it here.