On Saturday my club won the Midland 6 Stage Road Relays for the first time in a decade with a dominant victory over all our local rivals. No one got within a minute and fifty seconds of our time and our athletes occupied the top three slots in the list of fastest legs for the day. We led from the very first leg. It was a crushing win.

And I wasn’t part of it.

Despite my best efforts in training and our unoffical trial race at the parkrun the week before, I didn’t get selected for the A team. As the seventh best runner on paper there was no room for me in a team of six. It was a bittersweet victory for me; I was absolutely thrilled that my friends and training partners were rewarded for their hard work and had the chance to taste success, but at the same time I was frustrated at myself for not being among them.

I need to remember that this is the exact reason I moved club last year, though. I wanted more competition and I wanted to be surrounded by other athletes who were going to drag me along with them. Sometimes that means being picked for the B team. Now I need to use this as motivation to improve. Next time the road relays come around I want the gold medal hanging round my neck.

This troubles me greatly; I regularly think about the fact that I have not yet ticked this off my list despite years of trying. (As an aside, this is not even a joke. I literally do have a ‘to do’ list by the front door with a series of tasks crossed off, with a sad, lonely ’14:59′ uncrossed at the bottom of it. It has been sitting there since last July.) 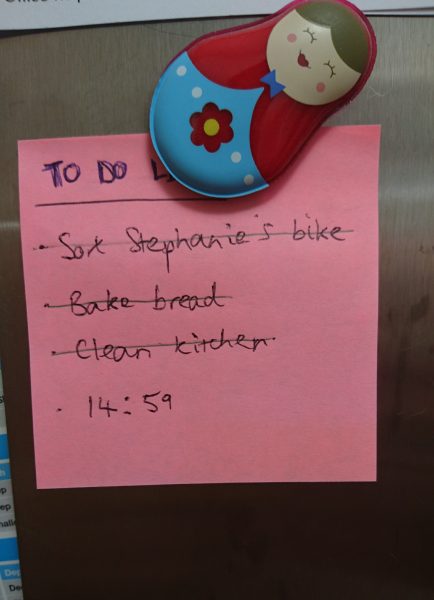 Not realising that I possess ample amounts of intrinsic motivation already, my wife has decided that doubt and provocation are now the best ways to ensure I achieve my goal. Where carrot has failed, stick is its substitute. It started again yesterday:

“I don’t think you’re ever going to break 15 minutes.”

“Look, I’m going to alright, I just haven’t done it yet”

“I don’t believe you”

As it turns out, I need neither carrot nor stick right now. I give myself plenty of stick already. I know I’m going to do it. Those 5.6 remaining seconds are going to be sliced off my PB and one day I will wonder what all the fuss was about. I just hope that day is soon.

I took over in the lead, a 59 second cushion separating me from the chasers. No one in sight in front or behind. I ran a controlled effort up the first hill, not wanting to put myself in the red so early in a leg that would last nearly half an hour. The only indication I had that I was actually in a race were the shouts from the odd spectator I knew. It was bitterly cold, by far the coldest I have ever been in a race. Had the snow started falling any earlier I am certain this year’s Midland 12 Stage Road Relay would have been called off.

By the time I reached the flat section after the first hill the snow was coming down heavily; by the time I reached the out and back section I was in the midst of a full blizzard. The motorbike that normally leads the men’s race was nowhere to be seen; this was a surreal experience. This is a desperately quiet part of the course. Being the furthest section from the finish, it is rarely visited by spectators. I started passing runners from the women’s race. The presence of other humans awoke me from the lull of concentration I had found myself lapsing into. I pushed on, struggling to gauge my effort in the presence of athletes running much more slowly. Shortly after the turn I saw one of my competitors for the first time in the race. And another. And another. It occured to me at this point that it was impossible to end the day with a positive number next to my name. There was no one to pass but plenty of people trying to pass me. The gap to second had shrunk significantly and I made it my goal not to relinquish the lead that my team mate had worked so hard to set me up with. I listened for shouts of encouragement behind me that might indicate that I was about to get caught. By the time I started hearing them I was in the last mile. Having raced on it for years I know the Sutton Park course like the back of my hand and knew that if I could get up the short hill before the finish with a few seconds in hand I could probably hang on. Lungs and calves burning, I gave one last big effort over the hill and launched my finishing kick as I rounded the last corner. The gap was not getting any smaller by this point and cheered on by my teammates, I hung on. By two seconds.

This was only part of the day’s excitement though. Behind us, Bristol were slowly making their way through the field and setting up one the best races I have seen in Sutton Park. They took the lead on leg 7 and extended their lead to around a minute. We had three strong runners on the last three legs though, and started clawing back at the deficit. At the start of leg 12, they were half a minute ahead. By this point, I was out on the course, running between different points to offer my support. 20 seconds by the top of the hill. The gap was closing. Sadly, however, it didn’t close enough and we ended the day with silver medals for our efforts. After over four hours of racing, the first two teams were separated by a mere 16 seconds. One hundred metres after 47 miles of running.

I was cold, tired, hungry and was losing feeling in my fingers, but I was happy.