It was announced this week that Paula Radcliffe will be making her competitive return on May 15th at the Great Manchester 10k.

With apologies to the likes of Coe, Cram, Holmes and Edwards, Paula Radcliffe is the greatest athlete ever to have emerged from within the British Isles. She holds every British record from 3000m upwards and holds multiple world championship titles on the track, the country and on roads. No Briton has pushed the boundaries of their event in the way that Radcliffe has, let alone put the boundaries out of sight of most of their competitors. 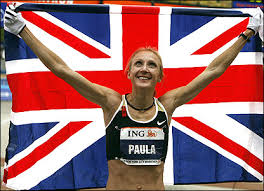 In my view, her marathon world record from London in 2003 (her finest hour – or more specifically 2 hours and 15 minutes) is the greatest in the books. It is better than Bolt’s 9.58, better than Komen’s 7:20, better than El Guerrouj’s 3:43, superior to Koch’s 47.60 and beats any of Isinbayeva’s vaults hands down. Say what you like about having a male pacemaker to drag her round the course but no other woman has come within three minutes of her best time. She was not just the fastest woman in the world that year but the fastest person in the UK, male or female. Astonishing. Of the current crop of female marathon runners, Mary Keitany is the only name that springs to mind capable of recording a time close to Paula’s 2:15:25.

But the one thing lacking from her expansive trophy cabinet (do athletes have those or is it just something I like to think they have?) is the Olympic medal for the marathon. As the number one female marathoner and newly crowned world record holder, the world had already draped the gold medal round Radcliffe’s neck before the 2004 Athens games had even begun. Stomach problems led to her withdrawing from the race and losing her chance of the gold medal that should have been hers. A similar story in Beijing four years later meant that for all her accolades, the one thing the Bedford athlete doesn’t possess is an Olympic gold.

Undoubtedly, Paula Radcliffe is one of the best athletes, along with the great Wilson Kipketer and others, never to have won gold at an Olympics. She has a chance to put an end to this injustice on home soil next summer, which is one of the reasons why I am so excited about the Games. No one deserves it more than her, and the prospect of her running down the Mall (not the Olympic Stadium track unfortunately – more on that another time perhaps) in the lead is one that would cap an otherwise perfect career.

So it is with excitement and anticipation that I await the Manchester 10k on May 15th, not just because I am running it but because it sees the start of the comeback of the greatest marathon runner of all time, and hopefully one that will be completed on August 5th 2012.