This week it snowed.

It started on Friday morning in the early hours and lasted all weekend with a just a few breaks on Saturday. Runners can train in all conditions – extreme heat, extreme cold, heavy rain, strong wind, but snow is the one that causes the most problems. Where do you go? If it’s heavy enough, as it was today, you’re OK as long as you stay off the roads and pavements, easier said than done when periods of snow tend to coincide with the times of year when daylight is hard to come by. Ice makes things tricky; even if you can find somewhere to run you might not be able to run hard enough to get a good training session in.

And yesterday a training session was just what I wanted.

The week was meant to be a taper week ahead of Telford 10k, due to be held this weekend and cancelled on Friday afternoon as a consequence of this current bout of snowy weather. Tuesday’s session was a long track session on very tired legs and Thursday’s was a 6 mile run with the middle two run hard. I felt great and clocked 10:02 for the two miles, feeling strong and as though I could have run for much longer at that pace. This left me excited for what I might do at the weekend and full of ‘what ifs’ the following day post-cancellation. I won’t have another opportunity to test my fitness in a race for another few weeks now and hope I can hold this good form until then.

This week I agreed to help Dan with his research by volunteering to take part in a VO2max test in the lab at the Insitute of Sport and Human Sciences at the University of Wolverhampton’s Walsall campus. The test was essentially split into two parts, the first a fairly standard VO2max test and the second a test to examine the impact of a spoken ‘intervention’ on running economy.

Part 1, the VO2max test, was a challenging but controlled (at least for the first part) test to establish my VO2max as well as my lactate readings and perceived levels of effort at different paces. This actually felt much easier than the test I did 5 years ago because for the main section of the test I was not running to exhaustion. The test I had done previously involved increasing the pace of the treadmill every minute, starting at 9km/h. This meant that by the time I couldn’t run any further, which from memory was at 22 or 23, I had been running constantly with an increasing pace for the best part of 15 minutes, the last 5 of which were very hard indeed. This test was different in two respects, though. The first was that I had a break of 30 seconds between each 3 minute effort and the second was that the end point was clearly defined at 20km/h. During this 30 second recovery period a lactate reading was taken from a small sample of blood drawn from my right ear and I was asked for a perceived level of effort on a scale of 0-10 based on descriptions for each number on a chart in front of the treadmill. The next part of the VO2max test, described as the ‘ramp test,’ involved the treadmill being set at a fixed pace, in my case 17km/h based on the data from the previous part, and the gradient of the treadmill being increased incrementally each minute. I managed just over 6 minutes on this test before I couldn’t manage the pace any more! There was a crash mat behind the treadmill during the test in case I lost control but fortunately it was not required!

Part 2, the psychological intervention section, was nowhere near as difficult as it involved running 4 sets of 3 minutes at a reasonably comfortable pace (18km/h, roughly the pace I could mantain for an hour) with 90 second static recoveries. For the sake of fairness, the same music was playing in the lab as the music that had been playing during the VO2max test, the excellent The Colour and the Shape by the Foo Fighters! For the first two efforts I was largely left to my own devices save for the odd few words of encouragement from the lab staff who were taking readings. Immediately before the third a recording was played in which I was instructed to focus on form, to relax and stand tall and during the third effort a three-word mantra of “strong, controlled, relaxed” was played intermittantly. This instruction was withdrawn for the fourth effort but I was urged to repeat the words in my head whilst running. It is hard to say whether I felt any different as a result of focusing on my form. Whilst these efforts did not feel any easier, the data may end up showing that I was using less oxygen and producing less lactate. Or maybe not! Once Dan has performed this test on a larger sample of athletes he may be able to tell what the impact of such an ‘intervention’ is.

This was a surprise. After only one week of proper training I was not expecting to run particularly well at the Birmingham League this weekend. Last week I couldn’t get under an hour for 10 miles; this week I made the top 20 in a very competitive fixture. It seems that the more time passes the higher my basic level of fitness becomes, and getting back to full fitness takes less time with every injury or setback. My floor is getting higher. Now it’s time to see how high my ceiling is! 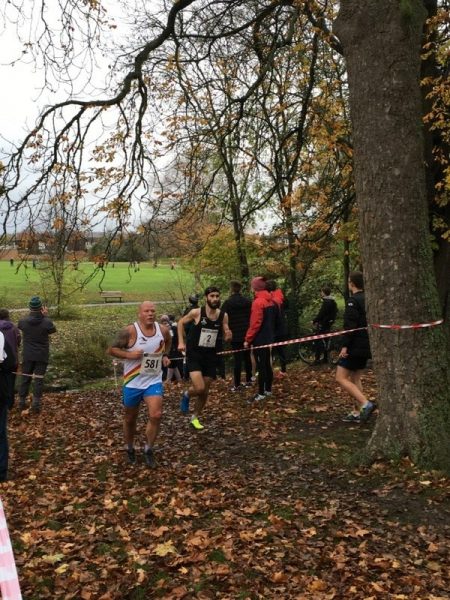 This week was the first proper week of training after tearing my calf at the National 6 Stage four weeks ago. Since starting with some light jogging last week I have gradually built up the volume, whilst adding slightly more intensity towards the end of the week.

My calf is fine. I know this, not just because I managed to run 127km this week, something I am told is not possible with a calf tear, but because the scan last week showed that what once resembled a large hole was now a smooth meaty chunk of well formed muscle tissue. However, this doesn’t stop me worrying that it is suddenly going to go again. I find this amusing. As runners we train ourselves to be able to ignore pain; it is an incovenience that needs to be overcome at all costs, a sign of weakness and I’m not weak, thank you very much. But when you return from injury the opposite happens. You become aware of every little tightness or sensation of discomfort, convinced that it is a sign that the injury is returning. The kind of small niggle that would barely raise an eyebrow under normal circumstances now becomes a clear indication that the injury is back again, and probably worse than it was before.

This may well be down to the fact that in order to succeed in this sport you need to be all-or-nothing with it. You will not manage to put in all the hard, difficult training if you aren’t convinced that what you are doing is the most important thing in the world. Sadly the flipside of this belief in the importance of what you are doing is the sense of loss when you cannot do it. The fear of this triggers irrational reactions to pain and a heightened feeling of worry.

I hope it passes soon.